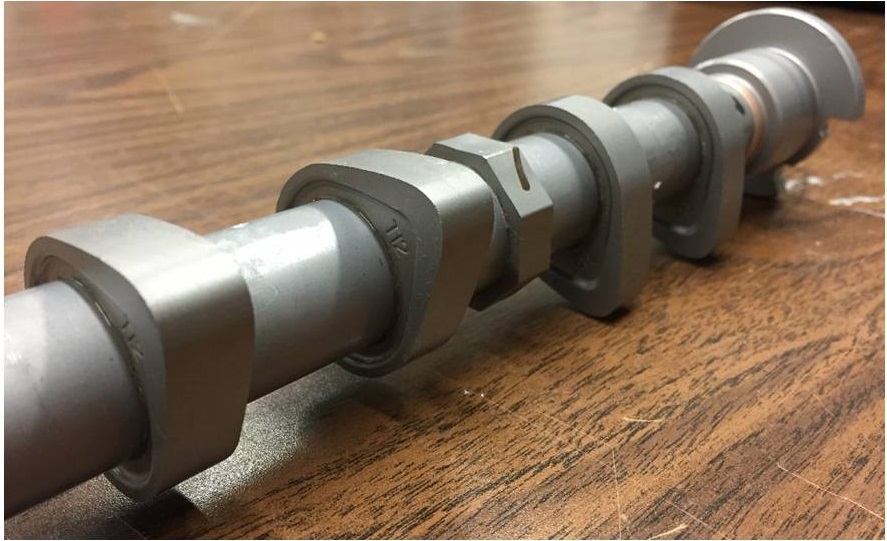 Camshafts are typically manufactured my machining cast iron, forged steel or billets down to the desired shape. Some manufacturers have started to produce camshafts by joining cams to shafts with a brazed joint. Due to the force being potentially applied to the brazed joint, a quality control is required to ensure brazing quality and that a sufficient percentage of cam is solidly brazed to the shaft.

A camshaft is basically a shaft with cams distributed along its length. Cams can come in different shapes with one common characteristic: there is at least one protuberance found along the circumference of the cams, resulting in an irregular shape. A common model is a cam with a nose (lobe), where the brazed joint is not parallel to the outer surface. In such a situation, there is little to no probability of recording an echo from the joint; this is what will be referred to as the uninspectable area of a cam. 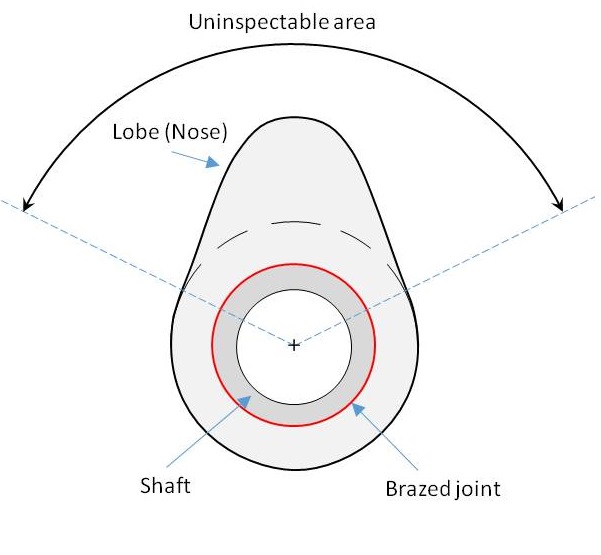 It is not always necessary to inspect each individual part of the camshaft to control the quality of a production. A statistical analysis can be performed on sampled parts taken from the production line. The same logic applies to the uninspectable area of the cams; a statistical analysis can still be performed by monitoring the percentage of good brazing within the inspectable portion of the cams. When using ultrasounds to monitor the brazed joint quality, the evaluation must be normalized to ratio of inspectable area. For example, if the inspectable portion of a cam covers 65% of the circumference and the cam is found to be perfectly bonded, the output of the evaluation must be that the percentage of good brazed joint is assumed to be 100%.

When inspecting a shaft, the natural and efficient way of performing an automated inspection is to scan along the axis of the shaft and rotate it by small increments, or to rotate the shaft continuously and index the probe along its axis. With camshafts, a very large portion of the shaft does not need to be inspected since the cams only cover a small portion of the shaft. In order to optimize the scan efficiency and minimize scanning time, an adapted scan type that allows to separate the scanning surface into non-continuous inspection surfaces has been developed. With this tool, only the cam surface is inspected and the probe indexes from one cam to another. 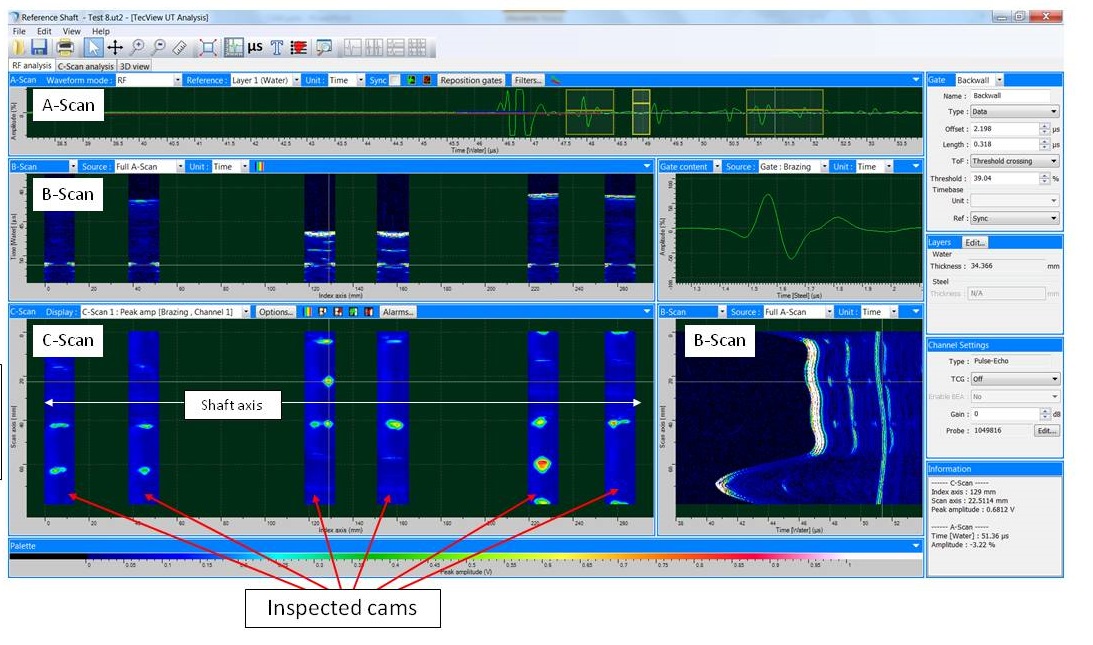 Only the cam surface is scanned and displayed at the proper position along the shaft. When properly calibrating the ultrasonic signal sensitivity, lacks of brazing can be identified and sized by applying a detection threshold on the echo bouncing from the brazed joint. If the probe frequency is high enough and a focused transducer is used, -6dB drop sizing can be applied. The reference level being provided by the calibrated reference sample.

Running an analysis without considering the inspectable ratio of the cams does not allow to properly estimate the percentage of welded surface of the full cam. In the above example, 35.9% of the cam surface is not inspectable, as illustrated by the backwall echo. 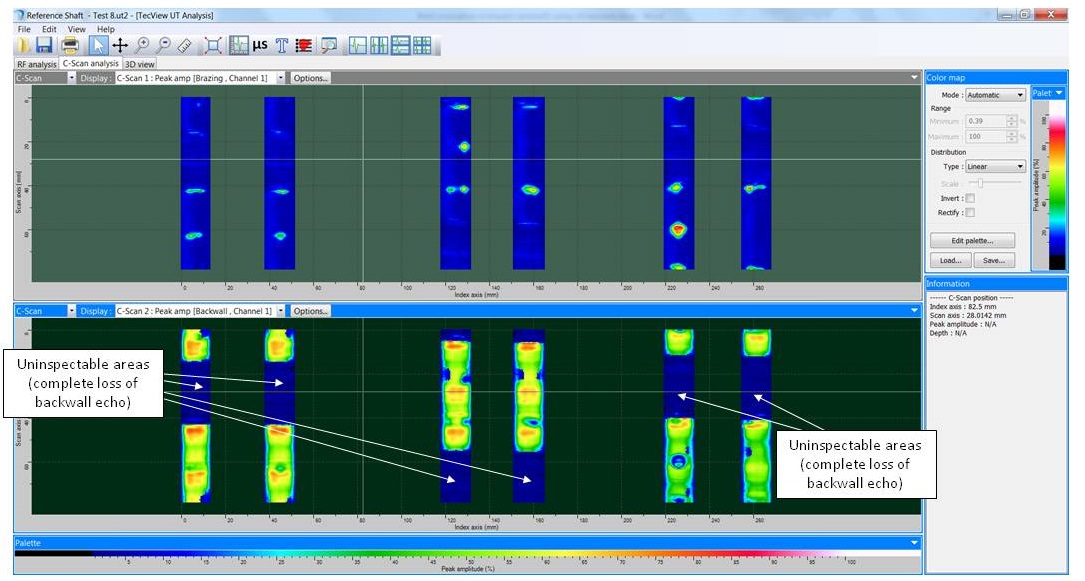 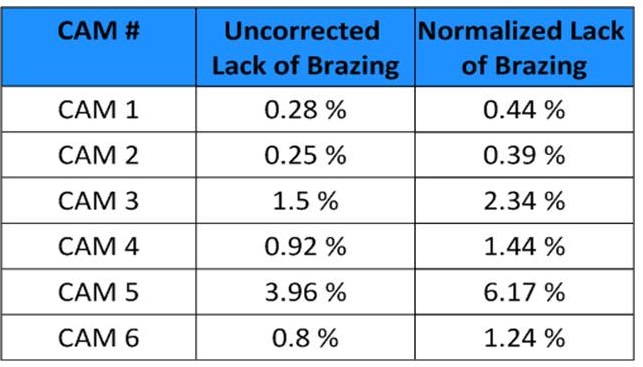 This ultrasonic testing method proved to provide a valuable tool for performing statistical analysis during camshaft production even without complete coverage of the brazed surface between the cams and the shaft.