Aerospace composite materials and structures take many forms, from thin plates to complex 3D shapes. One of the challenges of inspecting the more complex structures while using ultrasonic systems is to maintain a good SNR in all portions of the part. This can be particularly problematic when inspecting structures presenting large thickness variations or different material composition.

Panels bonded to honeycomb cores are good examples of such challenging structures. Ultrasonic testing of these types of materials is typically performed by transmitting ultrasounds through the thickness of the material (through-transmission), anomalies being identified by any loss of transmitted signal.

When adjusting the sensitivity of the ultrasonic instrument, the amplitude of the signals transmitted through the material must be kept below saturation in order to have reference levels for amplitude drop sizing. The attenuation of ultrasounds is typically very small for a skin-to-skin bond (no honeycomb). Sensitivity (gain) must therefore be kept low when we need to detect any indications in these structures. On the other hand, the attenuation is naturally high in honeycomb structures. Inspecting a structure presenting portions with and without honeycomb therefore presents a challenge to set the instrument sensitivity. Adjusting the gain on the skin material can result in a low contrast and poor SNR in the honeycomb structure. A high dynamic range (ratio between the largest and smallest meaningful signal amplitude) is required to detect defects in both sections of the material from a single gain setting.

What dynamic range is needed?

Logarithmic amplifiers (Log amps) have been widely used to perform ultrasonic testing of composite structures. The logarithmic amplification increases the dynamic range by performing a non-linear amplification of the ultrasonic signal in order to output a signal that is linear on a logarithmic scale. In practice, this means that signals of low amplitude are amplified at a higher dB level than the highest amplitude in the acquired A-Scans. The output of the logarithmic amplifier is a modified A-Scan which ertical scale is proportional to dB instead of Volts, yet represented on a volt or %FSH scale. When used by automated ultrasonic testing systems, a logarithmic amplifier allows for the production of C-Scans that have a high contrast between transmitted signals and the noise baseline. On the other hand, contrasts are decreased between high and low amplitude transmitted signals. Finer details about the structures are therefore sacrificed to maintain a high SNR in all areas of the samples. This allows one to inspect the full sample all at once, without having to re-scan sections of the sample at different gains. Dynamic ranges of such apparatuses are specified around 90dB, however signals entering the logarithmic amplifier must be extremely low noise, otherwise the resulting dynamic range is highly compromised. For this reason, narrowband filters centered on the probe frequency are typically used to remove as much noise as possible from the ultrasonic signals before entering the log amp.

Before the introduction of numerical data acquisition, decibel scaling of ultrasonic signals was only possible through the use of logarithmic amplifiers. With data acquisition, converting amplitude to a decibel scale is now an easy task. However, high resolution data acquisition must be performed in order to obtain a valid dB scale. C-Scans can therefore be produced on a dB scale as if a logarithmic amplifier was used. However, the vertical resolution of the numerical acquisition and the electronic noise would limit the dynamic range. As a result, contrast between high and “zero” amplitude signals is limited by the noise level. For example, if there is a noise baseline of 0.5%, the resulting amplitude referred to 100% will be -46dB on the decibel scale; this corresponds to the dynamic range of the system. In practice, similar ranges can be expected to be obtained using acquisition cards of 12 or 14 bits.

In the event that more dynamic range is required, our TecView™ UT software allows one to record ultrasonic data at different gains. A second C-Scan can therefore be acquired simultaneously at a higher gain; this allows an ease in increasing the effective dynamic range of the ultrasonic inspection. Two C-Scan images are generated by the process: one for the lower gain setting and a second for areas where attenuation is more important. Since defect analysis and sizing must be performed using a reference signal in the vicinity of the detected indication, the analysis of each zone is done on different C-Scan images.

Comparison between a logarithmic amplifier and numerical acquisition

The example below shows the results of an ultrasonic inspection performed using a 12 bit acquisition card compared to an inspection performed with a logarithmic amplifier. The inspected sample has a honeycomb structure bonded to composite plates. Teflon tapes serve to simulate disbonds in the sample. For both inspections, the A-Scan amplitude was set to 80% of the full screen height at the reference location. This implied reducing the energy of the emitted pulse until the output signal of the logarithmic amplifier was at 80% of the screen at the reference point.

The images below shows the C-Scan obtained without the logarithmic amplifier by maximizing the echo signal amplitude in the skin area. The dark blue area represents the honeycomb structure area; this image is a good example of the poor contrast that results from large attenuation difference within a single sample. Here, there is a difference of approximately 29 dB between the maximum response from the skin and the response from the honeycomb structure. 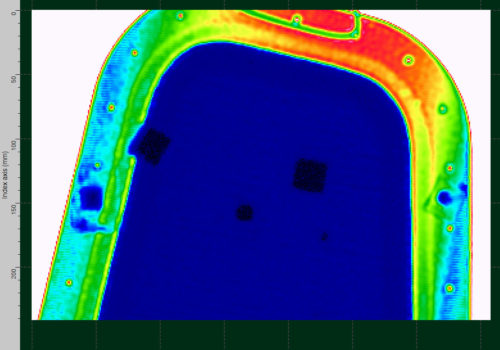 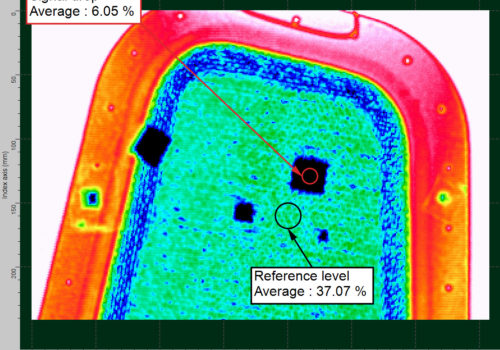 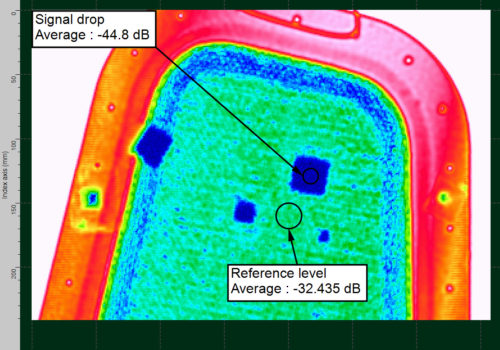 The log amplifier used during the scan tests was experimentally calibrated creating a table a table of calibration data from key sample points. This table was applied to the obtained C-Scan in order to convert it to a meaningful C-Scans with dB scale. 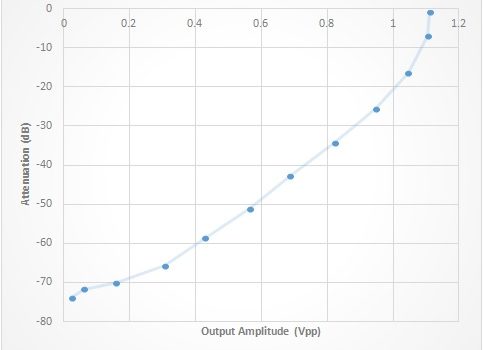 Calibration curve of the log amp; note the non-linearity of the response near 0dB and below -65 dB 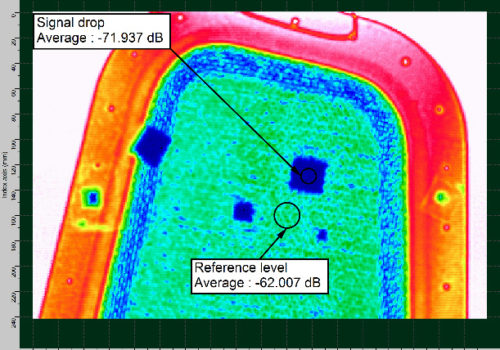 The dynamic range can be increased without using a log amp by using a two C-Scans acquired simultaneously but at different linear gains. Inspection tests were performed on the same sample where the second recorded C-Scan is 29 dB higher. The following results show the two recoded C-Scans. The image on the right shows the decibel scale representation of this second recorded C-Scan. The signal contrast in the reference area was increased to 35.9 dB in the second C-Scan (recorded with an additional 29dB). The dynamic range therefore was increased from approximately 44.8 dB to 68.3dB for the combined C-Scans.

The dynamic range resulting from the dual gain approach is therefore well adapted to the part being inspected. In addition, it allows us to perform quantitative dB drop sizing without requiring any special calibration curves. With this approach, the recorded signals for the C-Scans are linear and the benefits of the logarithmic amplifier are reproduced without its negative aspects: – difficulty to interpret the amplitude information -the high sensitivity to electronic noise -the necessity to limit the bandwidth of the logarithmic amplifier around the probe frequency.